Help us to keep you informed about Gateway Theatre Group productions

NEXT MEETING – Due to COVID 19 meetings cancelled until further notice

Unfortunately all productions have been put on hold due to the current COVID 19 pandemic. We would like to assure you we will be back bigger and better. Thank you for your continued support, stay safe and we look forward to seeing you soon.

It is with deep regret that The Gateway Theatre have to report on the sad passing of Mr James Barr on 20th May 2021. His wife Eleanor was a very active member of the group appearing in many productions.

It is with deep regret that the Gateway Theatre have to report on the sad passing of long time member and former chairman Mr Sam Ritchie. Sam was an intregal part of the Gateway group and although a few years ago left Portadown to reside in Ballymoney his legacy lives on. Deepest condolences to the family circle. 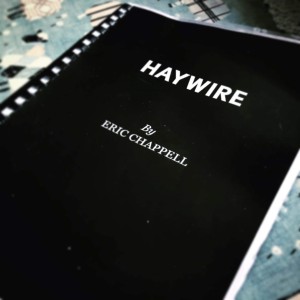 Unfortunately due to circumstances beyond our control our performances in Portadown and Crossgar have had to be cancelled. The Group apologise for any inconvenience and hopefully sometime in the future will stage this wonderful production.

Pantomime 2020 – Jack and the Beanstalk

The Gateway Theatre Group would like to thank everyone who supported Portadown Pantomime 2019 and would like to announce that next year’s production will be Jack and the Beanstalk.

Storm Ali did it’s worst and brought a tree down on the roof of the Gateway premises which had been replaced in recent years. The roof was quickly repaired and the group with two shows in rehearsal ensured that the shows went on . . .

The Gateway are used to bringing the house down, storm Ali tried to bring the roof down . .

GOLDILOCKS AND THE THREE BEARS

Thanks to all who contributed in the success of the 2018 pantomime Goldilocks and the Three Bears. The curtain came down on this wonderful show and already thoughts have turned to the next production.

STOP IT NURSE HAD THEM IN STITCHES 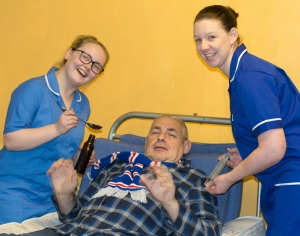 The nurses try to get to grips with Sammy McCracken in the production of Stop it Nurse.

DO YOU HAVE A PART TO PLAY?

We are constantly seeking new members with an interest in drama so if you have an interest in acting, helping backstage or have a keen interest in sound or lights you will be made most welcome at any of our monthly meetings.

It is with great sadness that the Gateway Theatre learnt last month of the sad passing of their long term member and former treasurer George Robinson. He will be sadly missed by the Group and the  drama community as a whole and our sad condolences are extended to his wife, son and wider family circle.

BE MY BABY by Amanda Whittington

The spring production, Be My Baby by Amanda Whittington was a fresh, exciting and thought provoking production with great music by a young enthusiastic cast. Full thanks to producer Robin Black for putting together this innovative show.

The curtain has come down on our annual pantomime and our thanks go to everyone for their support. Keep watching out for news of our next production.  If you would like to be a part of next year’s pantomime or any of our other productions in any form please come along to our next monthly meeting. We usually meet on the first Wednesday of every month.

(See Whats On Page for meeting details and venue)

The Christmas production this December was the hilarious Anyone Can Rob a Bank.  In this music-hall style farce, three men, Badger, Jereen and Windy, discuss how easy it would be to rob the local bank and they come up with the perfect plan. When they wake up to the news that the local bank has been robbed using their plan, they begin to suspect each other.

Portadown Pantomime is pleased to announce that the 2017 production will be Dick Whittington. Booking forms  can be obtained from Portadown Town Hall and Portadown Library.

Portadown Pantomime, Mother Goose had a successful run in Portadown Town Hall Theatre and The Gateway would like to thank everyone who supported it and hope to see you again very soon.

A rock/pop musical produced by Robin Black with a young energetic cast, Tick, Tick, BOOM was staged in Portadown Town Hall Theatre, Friday 17th and Saturday 18th April.  Containing fourteen original songs it is based on the life of the writer of RENT,  and this was the first time this production has been staged in Northern Ireland. Although the show was performed in front of disappointing audiences it was an exciting and thoroughly professional production and was an exciting new innovation for the group. It received a standing ovation on the Saturday evening and hopefully will be staged again in the future as it was one not to be missed.

The Gateway Theatre Group launched the celebrations of their fiftieth anniversary with a civic reception hosted by the Mayor of Craigavon in the civic centre. The group wishes to thank the Mayor and his staff for a wonderful evening. 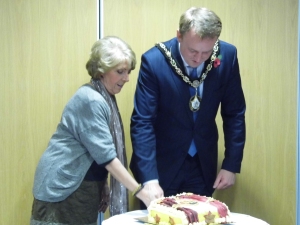 The curtain finally came down on this year’s pantomime Cinderella. Director Millie O’Kasilli was delighted with the success of the production which attracted very favourable reviews, and she has gone on record thank all involved, especially the audiences who were very generous in their comments.

Some of the cast of Cinderella in rehearsal under the watchful eye of musical director Ryan Harris.

The Gateway Theatre Group’s Christmas production was Clerical Errors by Georgina Reid, which was performed in Portadown Town Hall December 2014.

James Martin’s  simple, moral upbringing is suddenly shattered by the encampment of the  Briggs family in his now disused Methodist church. Their unorthodox lifestyle shows James a side of life he never knew existed!

Young Julie’s (Chloe Wilson) spirit and determination to keep her family together against all odds and her honest, if unconventional, appraisal of James’ congregation forces him to re-examine his own approach to life.

A comedy by John Chapman and Michael Pertwee

Peter Fisher is the manager of the West Berlin office of a British car company where promoting British cars is like selling pork chops at a bar mitzvah! He is also an undercover agent for British Security of Industry, a role for which he is most ill equipped. As his wife Monica is due to fly back to Northern Ireland for a short break, Fisher plans to spend his birthday quietly. However, when Monica’s plane is delayed and she returns home, followed by Heidi, Fisher’s mistress, Mitzi, a singing telegram girl, Cadwallader, from British Security of Industry, who is awaiting the arrival of Hans, a top industrial spy, and Tregunter-Jones the Rep. from the motor company – Fisher’s birthday doesn’t quite go to plan!

Look No Hans! is a fast-paced, fun-filled farce which enjoyed a successful run at the Strand Theatre London with David Jason as the hapless Fisher. 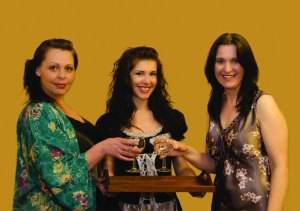 Bernard is planning a romantic weekend with his chic Parisian mistress in his charming converted French farmhouse, whilst his wife, Jacqueline, is away. He has arranged for a cordon bleu cook to prepare gourmet delights, and has invited his best friend, Robert, along too to provide the alibi. It’s foolproof; what could possibly go wrong? Well…. suppose Robert turns up not realizing quite why he has been invited. Suppose Robert and Jacqueline are secret lovers, and consequently determined that Jacqueline will NOT leave for the weekend. Suppose the cook has to pretend to be the mistress and the mistress is unable to cook. Suppose everyone’s alibi gets confused with everyone else’s. An evening of hilarious confusion ensues as Bernard and Robert improvise at breakneck speed. 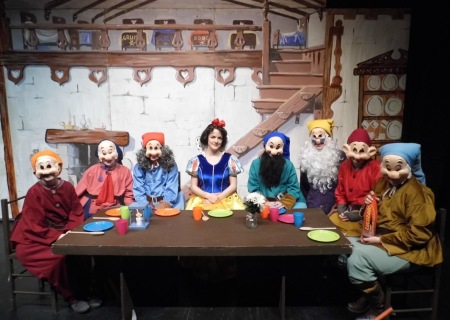 The cast of Snow White and the Seven Dwarfs 2013. Portadown Pantomime have been part of Co. Armagh’s festive traditions for over 30 years.

‘Kindly Keep it Covered’ for Summer 2012 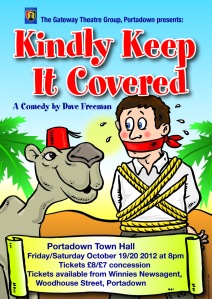 Roland Dickerby, formerly of the Kindly Mutual Insurance Co, runs a health farm with his wife Julia, bought with proceeds of a hefty insurance pay out on the demise of Julia’s first husband, the charming rogue, Sidney. Life isn’t easy for Roland; a healthy lifestyle is not exactly his cup of carrot juice, his formidable mother-in-law, Olivia, keeps a very beady eye on him and he is constantly harassed by portly guests in search of carbohydrates of the sweet variety. Today, however, fate has something extra special in store for Roland: Sidney has decided to resurrect himself and turns up at the farm just as Vanessa the wife of Roland’s ex-boss from the Kindly Mutual, checks in for a health-giving visit. This fast, furious and frantic farce, set in the present day, originally starred Terry Scott.

Donald McDonald looks menacing with his gun in front of the Ramsay family in a scene from ‘Married Bliss.’

The Ramsay’s look none too happy with their holiday accommodation.

‘Married Bliss’   Colin and Grace Ramsey go for a restful country break to a farm near Ballymena, owned by one, Angus Calvin Knox, a dour skinflint of a man, whose spinster sister Mary Rose is desperately pursuing the hired help, Donald McDonald, the love of her life. Food is scarce and expensive, so in return for some freebies, Grace offers to help Mary Rose develop her womanly skills. However, the peace of the countryside is interrupted by the arrival of their daughter Janet and her baby; Mrs Martha Ramsey, Colin’s formidable mother; and finally brother James and wife Joyce.  Angus holds a birthday party for his sister and things get complicated when Martha decides to hold a seance….will the ghosts appear and more importantly. . . will Mary Rose get her man?

CHRISTMAS PRODUCTION 2011
Bob Anderson produced the group’s Christmas Production,  Alan Ayckbourn’s ‘Round and Round the Garden’ .

A scene from the Christmas 2011 production of ‘Round and Round the Garden.’

The cast of ‘Widows’ Paradise’ with director Millie O’Kasili.

Sam Cree, is probably Northern Ireland’s most popular playwright, although no longer with us his comedies are guaranteed to ‘pack them in.’ The Gateway Theatre is regarded as some of the best exponents of his plays and a little known fact is that they did premier one of his plays, ‘Sink or Slim,’ something they are justly proud of. The above picture was taken when Sam visited the cast of ‘Sink or Slim.’

PHOTOS OF US ONLINE !

Ideal for printing and placing on the mantlepiece to keep small children away from the fire, a selection of photos of our group is now available for your viewing pleasure via the not terribly subtle link on the right. Enjoy!