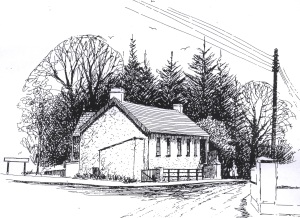 The Gateway Theatre Group is based in Portadown, Northern Ireland and is a totally amateur group with members contributing to the group’s work in their spare time. The group has approximately forty members.

Each year the group has a number of productions: in January our annual pantomime is performed over fifteen shows; in the spring we usually undertake a small production in which we attempt a show which diverges from our usual material; in the summer season we undertake to produce a comedy for the ‘Summer Theatre’ which is held in the seaside town of Portrush on the North coast – the show is then brought on a short tour of venues culminating in two nights in our home town of Portadown; and the last Production of the year is a Christmas play.

In 1960/61 pupils of the local technical college were so enthused with at the success of a production of Pygmallion, that when school finished a number of them wanted to start a drama group.

To raise funds founder members collected door to door around the town and held all sorts of fund raising events such as cakes sales.

Some of the early meetings were held in the front room of Millie O’Kasili’s parents home.

Through the good offices of the Portadown Music and Drama Festival Committee in 1964, the Group acquired premises at Church Street Portadown. This was a former stable loft and was transformed into a 60 seater auditorium!

The first production was a play called @Cock-a-doodle-doo” and the renowned Belfast actor Joseph Tumelty was invited to become the Group’s first president and he attended the first performance.

Several structural changes appeared over the years, the rehearsal area was changed into a purpose made coffee area with tea bar, sinks, water geysers etc and soft seating to relax on whilst enjoying their coffee. 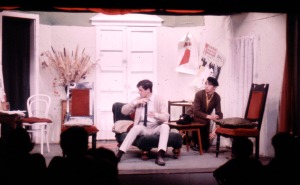 A scene from ‘Figure of Fun’ performed in the original Gateway Theatre and this picture shows just how close the audience were to the stage.

Richard Gilpin, who took part in early productions remembers well the team spirit that brought live theatre to Portadown and which has continued to do so ever since. Richard looked after the groups lighting over the years and he can recall the lighting control desk in the old theatre. It was reached by climbing up a home made ladder to a small loft above the stage. One drawback was that once the performance started you were stuck…

The rear of the stage had a very tight staircase that led down to the dressing room below. Indeed the cast of one production recall the fateful night when someone fell down the staircase during a show….no broken bones I am glad to report and the show went on.

A scene from the ‘See How They Run’ being performed in the Gateway Theatre in 1968.

In 1968 the theatre acquired further storage space beneath the auditorium for scenery, props and this left space for an extension to the Coffee Bar area that had proved a little on the small size. New seating was obtained from Belfast and the seating capacity was increased to an eighty seater. The Gateway was always regarded as an intimate theatre and it was the desire that it should remain so. This intimacy stemmed from the physical closeness of the players to the audience and the fact that so many of our patrons have come to know us very well over the years. 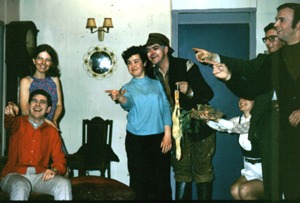 Some of the cast of the Gateway Theatre in a performance of ‘The Whip Hand.’

The premises were renovated in 1976. A great deal of time and money was spent in making the theatre both more comfortable and safer for our patrons. Many sections of the building were fireproofed in accordance with the Fire Authority regulations and a Fire Escape and emergency lighting was installed. The lounge was extended and re equipped and a projection room was constructed for the use of our friends in the Craigavon Film Society. The room was used as a control room for sound effects and lighting for productions and ensured greater co ordination of sound and lighting cues.

In 1983 the group joined with Sharon Moore and Donna Whitten and their dance studio to produce the Pantomime Aladdin which proved extremely successful. A local extremely talented artist Colin Turner who taught in a local school painted the scenes, on cardboard for the first years. In 2004 we celebrated our 21st Pantomime Cinderella with 10 of the original members involved back in 1983. We stage over a three week period 15 performances 12 evening performances and three Saturday matinees. We now build the sets with proper plywood sets and the scenes are flown into the fly tower. 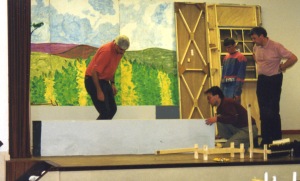 Building the set for ‘All the Kings Horses’ in 1997

Unfortunately in August 1991 the owner of the building announced we had to terminate our lease to make way for a proposed mall of small shop units. Portadown Library now stands on the site.  We commenced to clear out and on 26th August we received a final demand to vacate the premises. A frantic search of suitable buildings commenced and we managed to secure our present building at 57 Gilford Road. The building has taken on many uses: it was formerly Levaghery Sunday School, it then became the changing room for Portadown Rugby Club (we found a large team size concrete bath), then it became a workshop for Blake Campbell who was Professional at Portadown Golf Club.Quite a lot of hard work went into bringing it into usable rooms once more, to form a rehearsal area, a workshop, and a store facility.

We now perform shows at Portadown Town Hall. This one of the best equipped theatres outside Belfast having a fly tower that permits the scenes to be flown above the stage area. The lighting and sound are now run from a dedicated lighting suite at the rear of the balcony. This is fully equipped with computerised lighting control and state of the art sound mixing facilities, including a new sound effect board. 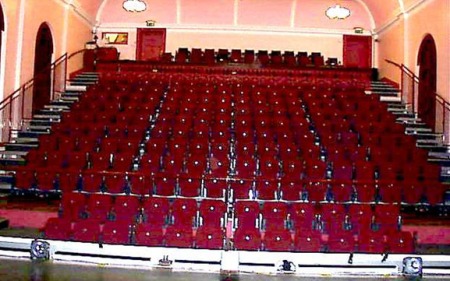 2004
In 2004 the group was delighted to travel to the USA to perform one of Sam Cree’s comedies ‘Married Bliss’ in La Grange, Georgia with whom Craigavon is twinned. The play was performed in the local university theatre and was well received, so much so that the group have been invited back and promised to perform another Irish comedy in the near future. While there, members of the group took time out to introduce a class of drama students to pantomime.

The cast of ‘Married Bliss’ pictured on stage in LaGrange, USA.

The year 2008 saw the 25th Anniversary of Portadown Pantomime, and again the group played 14 sellout shows. The group and cast were then invited by the Mayor of Craigavon to a Civic Reception in the local council chambers to mark the occasion.

The group received an invitation to return to La Grange in the USA in early 2010, which unfortunately they had to decline, but hope to accept the kind invitation at a later date.

2009 was a year in which the group invested heavily on improving the building including a new perimeter fence and new carpets throughout. 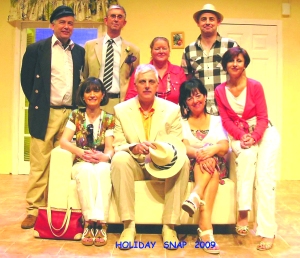 The group ended 2012 by investing heavily in the Gilford Road premises, putting on a complete new roof and electrics as well as some cosmetic improvements to the facilities.

Thirty years of pantomime by the Group was celebrated with a production of ‘Snow White and the Seven Dwarfs’ and the celebrations were brought to a climax on the final night in the presence of invited guests, including the Mayor of Craigavon and Harry Foy, the man responsible for bringing Pantomime to Portadown all those years ago.

It is a tribute to the dedication of the founder members that the Gateway Theatre Group is still flourishing. Every year it produces at least two plays, a Christmas Show, and a Pantomime each year. Over the years many of the members have left in connection with their jobs and family commitments. Sadly we have lost some of our former members such as Dessie Taylor, Bill McKay Kenny and Bertil Gallagher and former president and renowned artist Colin Turner. The Group currently has approximately 45 members and meets regularly once a month.

The Group also has a varied social programme, with barbecues, treasure hunts, Halloween and Christmas Party nights not to mention the after show parties that go on into the ‘wee small hours’.

This site uses Akismet to reduce spam. Learn how your comment data is processed.